Activity One:
President Kennedy resisted sending combat soldiers to Vietnam and on a couple of occasions indicated misgivings about US involvement in the war. Nevertheless, by the time Kennedy was assassinated, the USA was much more deeply and directly involved in fighting the war in Vietnam.
In what ways did Kennedy broaden the USA’s commitment to Vietnam?
​Could the USA have withdrawn from Vietnam in 1963?
The US could’ve withdrawn from Vietnam as their attempts to contain Communism were very unsuccessful. Therefore, they could’ve avoided the whole situation and just observed. However, that would be against the concepts of document NSC-68 and therefore, in a way it can be argued that the US were stuck in Vietnam helping to contain Communism. The initial US attempts to stop the Vietcong were very unsuccessful. The use of Agent Orange and Strategic Hamlets Program only alienated the peasant population of Vietnam. Diem’s social and political reforms were very unsuccessful and caused more discontent. When Diem died in a coup in 1963, the problem was still not resolved.

All of these negative consequences caused by the US should’ve been a sign to them that staying in Vietnam wasn’t an option. They had caused more problems than what were previously there and therefore, should’ve left Vietnam alone instead of trying to manipulate everything because of the US disinterest in Communism.
Activity Two:
Researching the following questions will help your understanding of the type of warfare that went on in Vietnam on both sides, and its effectiveness.
What were the characteristics of US strategy?
Unfamiliar Terrain and Conditions:
Why were the Vietcong Successful?
Environment:
Vietcong Uniform:
Past Experiences:
How effective was the South Vietnamese army (ARVN?)

The ARNV wasn’t really effective as they continually required the support of the US to help them. Despite the funding by the US, the new weapons and the support of US troops, they weren’t strong against the Vietcong. The ARNV were used to conventional tactics and were out of place against the guerrilla warfare tactics of the Vietcong. The ARNV also failed to gain the support of the peasants in the same way the Vietcong had and were heavily connected to horrible tactics such as ‘Zippo Raids’ and ‘Operation Strategic Hamlet.’
Activity Three:
What reasons does President Johnson give to justify US involvement in Vietnam?
What evidence is there in this source that fighting in Vietnam was part of the wider Cold War conflict?
What are Chafé’s criticisms of the United States’ approach to the situation in Vietnam?
Which parts of Johnson’s speech would provide evidence for Chafe’s criticisms? 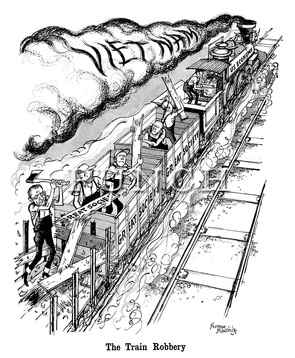 Who is the man with the axe? What is he doing and Why?
The man with the axe is President Johnson. LBJ is cutting up the wood metaphorically and dividing American society and using it as fuel to power the train. He’s doing this so that he can continue the war against the North Vietnamese and contain Communism. LBJ is willing to put his own creation – the ‘Great Society’ on the backburner for the South Vietnamese.

What is the smoke from the train supposed to represent?
All the troops that the US needed to send to Vietnam to help win the war. The great society is being using as fuel and the hacking of the wood can illustrate to us that society was divided by whether or not they wanted US troops to be sent over to Vietnam this foreign country they don’t know anything about.

What is the overall message (refer back to the title of the cartoon?)
That the ‘great society’ of America – LBJ’s home war against social injustice and poverty, which led to the formation of the credibility gap. The credibility gap was the difference between what LBJ’s administration told the Congress and what actually was happening. The ‘Great Society’ was over.
​Activity Five
How did US policy change towards the Vietnam War change under President Johnson?
Under LBJ’s Presidency, he became more open to the idea of sending US troops to Vietnam to fight, not just supplies or weapons. The decisions he made in attempts to stop
Alternatively, do you agree more with Quagmire Theory?
What does this show about the impact of Vietnam on American global Cold War policy? 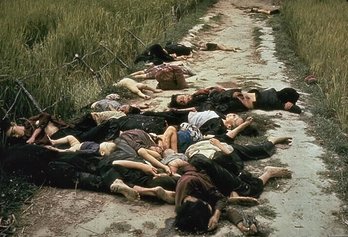 Activity Seven
What happened at My Lai, and what effects did it have on American public opinion?
Activity Eight
Why did Nixon need to end the Vietnam War?
What did he mean by ‘peace with honour?’